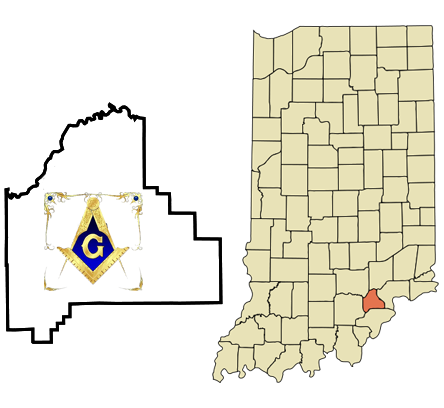 The earliest settlers of southern Indiana organized Masonic lodges and held their meetings in log cabins in the wilderness. Pioneer lodges were organized at Vincennes, Madison, Rising Sun, Charlestown, Vevay, Lawrenceburg, Salem, Corydon, and Brookville. The last mentioned was chartered by Ohio; the others by Kentucky. Vincennes Lodge No. 1, the oldest in Indiana was chartered by the Grand Lodge of Kentucky in March, 1809.

On December 3, 1817, eleven delegates from these various lodges met at Corydon, then the capital of the new State of Indiana, to make arrangements for organizing a Grand Lodge in Indiana. One of them was Henry P. Thornton, a lawyer living in Lexington (then in Jefferson County). They so advised the Grand Lodges of Kentucky and Ohio as to their desire. Permission having been granted, they met again at Madison on January 12, 1818, and the Grand Lodge of Indiana was duly organized with Alexander Buckner, Charlestown, Grand master and Alexander Meek, Madison, Deputy Grand Master. The old house were the delegates met is still standing in Madison.

The second lodge to be chartered by the Grand Loge of Indiana was Scott Lodge No. 12, at Lexington. In April, 1820, only two months after the Scott County had been formed, Masons residing in Lexington petitioned for a dispensation. They were Henry P. Thornton, Moses Gray, James L. White, and James Goodhue. The lodge was chartered September 18, 1820. The officers were: H. P. Thornton, W.M., Jesse Jackson, S.W., and Wm. W. Whittington, J.W. It remained small and not too active. Then because of lack of interest and financial difficulties the charter was surrendered December 4, 1829. Their lodge hall, which still stands today, was donated to Lexington to be used as a school, which purpose it served for many years. The number 12 was in 1845 given to Goshen Lodge, Goshen, Indiana.

Scott County was without a Masonic Lodge for the next twenty years. Then on December 28, 1849, a dispensation for Scott Lodge U.D., was granted to a group of Masons living in new Frankfort. The officers were: John Wiggam, Sr, W.M., Thomas Bishop, S.W., and Oliver C. Green, J.W. Four of these had been members of old Scott Lodge No. 12: Elisha G. English, John E. Stansbury, John E. Roe and Joseph Keepers. On May 29, 1851, a charter was granted for Scott Lodge No. 120. The officers were: John Wiggam, Sr., W.M., Samuel Davis, S.W., and Jacob Y. Bates, J.W. The little village of New Frankfort gradually went downhill because of the completion of the Jeffersonville Railroad about six miles to the west. Then in July, 1861, Scott Lodge No. 120 following the rest of New Frankfort, moved to the new town of Austin, (platted in 1853).

Next to be chartered n Scott County was Lexington Lodge No. 346, which received its charter may 29, 1867. The first officers were: James H. Morgan, W.M., Marion powers, S.W., and Dr. William D. Hutchings, J.W. Their charter was surrendered September 7, 1885.

In April, 1884, 19 master masons living in and near the new town of Scottsburgh (which had been platted in 1871 to become the new county seat) petitioned the Grand Lodge for a dispensation to organize a lodge of Master Masons in Scottsburgh. This was referred to the Grand Master, Albert P. Charles, for his action, which was as follows: “I have granted dispensation to form a new lodge to Scottsburgh, Scott County, Indiana, Jun 12, 1884. This matter was referred to me at the last session of the Grand Lodge, and after careful examination of all the surroundings, I deemed it advisable to issue a dispensation, as Scottsburgh is the county seat of Scott County, the largest town in the county and had no Masonic Lodge.”

This lodge continued to operate under dispensation until a meeting on May 12, 1886, when a resolution was adopted rquesting that a charter be granted. On the evening of July 22, 1886, the Past Grand Master Albert P. Charles, came down from Indianapolis and presented the charter, which was dated May 25, 1886, for Scottsburgh Lodge No. 572. “The lodge was then constituted and the following officers installed in ample form by the special Deputy, A.P. Charles, P.G.M., to wit: A.L. Gladden, W.M., W.G. Harrod, Sw., J.F. Ervin, JW., Melvin Hubbard, Treas., R.F. Alexander, Sec., F.M. Davis, S.D., John Dismore, J.D., and C.W. Cruson, Tyler. The lodge was then closed in due form.”